The Campbell family is one of the most ancient and distinguished in Scotland, with roots reaching back many centuries. While there are various theories about the origins of the clan, what is certain is that by mediaeval times the family had power and influence in the West of Scotland. The family emerged as one of the most powerful in Argyll, closely associated with the Bruces and Stewarts, and staunchly supported the king during the Wars of Scottish Independence. Their influence and importance in Scotland increased as time went by, and it is impossible to tell their story without describing briefly what was happening on the wider stage.

The first head of the family to hold an official title was Sir Colin Campbell who was honoured by a knighthood in 1280. In those days, this title was not hereditary, and each knight received the honour only by his own merits, often by providing some service to the king.

It is with Duncan Campbell, who in 1448 was referred to as Sir Duncan, Lord the Campbell of Lochow, Knight, and his son Celestine that the human story of the Argyll Mausoleum really begins. All of the people buried there led interesting lives, often remarkable, and their inpidual stories will in time all be added to this website. 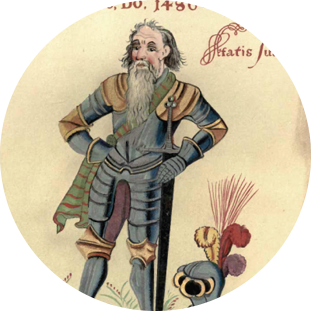