There have been small ferries crossing the Holy Loch for centuries. In the past, it was quicker and safer to travel by water wherever possible rather than travel overland. In ancient times only the Crown could award a Charter giving ferry rights and there were numerous legal arguments about ownership of the rights. The earliest reference to a ferry on the Holy Loch is in 1497, which had a passage from Hunter’s Quay to Strone, but there were probably earlier crossings. There is a way from the Ardnadam Glen settlement (now Ferry Road) direct to the shore of the loch. A ferry ran from here dating from those early times until as recently as the 1970s.
G. and A. Waddell ran the last ferry service which operated from Lazaretto Point to the opposite shore at Kilmun.  Although many steamers visited the Holy Loch piers this was the only service across the loch, and was very busy. The Wadells made their home at the now demolished Ferry Cottage which stood at the bottom of Ferry Lane, and they had a shed nearby for building boats. Brother Alex Waddell operated three motor boats, “White Heather”, “White Rose” and “Kelvin”, and had 7 rowing boats for hire at 2/6 an hour. His young helper polished all the brass and cleaned the boats, using a green shed on the shore to store the balers and tools as well as sets of fishing rods. Next to this was a tea hut run by Alex’s sister Cissie Waddell. Improved roads and transport made the service redundant and the ferry ceased operating in the 1970s.  ” White Heather” has been restored to its former glory and can still be seen on the loch.
On the north side of the loch there are piers at Kilmun and Strone, with Blairmore Pier round the point on Loch Long. On the south side of the Holy Loch is Ardnadam Pier, which is 200 ft (60m) long and has the distinction of being the longest of the Firth of Clyde piers.
During the days of the steamers all the piers were busy. The era of the Clyde steamer began in August 1812 with the very first successful commercial steamboat service in Europe, when Henry Bell's Comet began a passenger service on the River Clyde between Glasgow and Greenock. From the outset steamboat services were aimed at holidaymakers, and within ten years there were nearly fifty steamers on the Firth of Clyde, sailing as far as Largs, Campbeltown and Inveraray. With the rapid industrialisation and population growth of 19th century Glasgow great numbers were eager to escape – if only for a day - from the grimy city and when possible went on a cruise down the Clyde to clean and beautiful scenery. Business men soon realised that it was possible to live in an attractive village by the sea and be able to commute in comfort to their place of work using ferries and trains. It took only an hour to get from the Holy Loch to Glasgow, and the ferries must have felt like a Gentlemen’s Club at peak times. Over 300 Clyde Steamers were operating by 1900. Going doon the watter was still in full swing in the early 1960s but competition from more exotic holidays brought the era almost to a close and the Holy Loch piers were no longer used by the ferry companies.
Activity on the piers had reduced, but when the Royal Navy had a base here during WW2 they again became very busy. There were a few quiet years, but in 1961 the first US Polaris submarine sailed into the Holy Loch – the American Navy had arrived and the piers again were fully used.
Today Kilmun pier is used by Western Ferries but only as a place to tie up boats overnight or in exceptionally rough weather. The pier at Holy Loch Marina formerly used by the US Navy is now in use by boats collecting timber and small cruise ships. 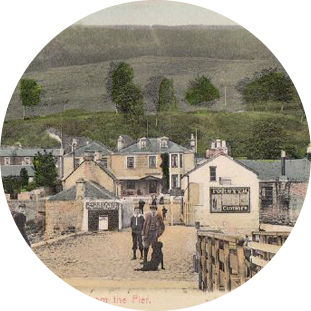