Among the many interesting people who have lived in Kilmun is a man referred to “as near to the popular idea of a mad scientist – abstracted, exploding into dotty experiment – as you can get”
In fact, Lewis Fry Richardson was a highly respected innovative scientist who made major contributions to the world of science. Outside scientific circles however, Richardson was never as well-known as his nephew, the actor Ralph Richardson or his Fry ancestors who manufactured chocolate.
Living in Newcastle upon Tyne, David Richardson was a chemist who became director of the well-known family business which produced high quality leather. He and his wife Catherine were active members of The Society of Friends, and brought up their seven children as Quakers. Born on 11th October 1881, Lewis was the youngest of the family and from an early age was very inquisitive, conducting his own experiments. His sister told him that “Money grows in the Bank”, and he tested the idea by burying some cash in the garden, feeling rather disappointed that it did not expand. His favourite subject at Newcastle Preparatory School was Euclid. In 1894, Lewis was sent to Bootham in York, a school for the sons of wealthy Quakers. Here the high moral standards of his parents were reinforced, as was pacifism, and a love of science was inspired by teacher J. Edmund Clark, an expert in meteorology. Lewis left school believing “Science ought to be subordinate to morals”.
This strong belief shaped the whole of his life. After leaving school, he studied at Durham College of Science – actually in Newcastle. His subjects were mathematics, physics, chemistry, botany and zoology, and he completed his studies at Cambridge University with a First Class degree in the Natural Science Tripos in 1903.
It seems that Richardson was restless as he quickly moved through a number of jobs – the National Physical Laboratory, the Meteorological Office, Manchester College of Technology, Aberystwyth University, the National Peat Industries, and the Sunbeam Lamp Company. A deep interest in mathematics grew from some of the work he carried out. In 1909, he married Dorothy Garnet and, although they were unable to have their own children, they adopted two sons and a daughter. Dorothy, through her own interest or loyalty to her husband, seemed happy to go along with his experimental approach to problems. When the Titanic hit an iceberg and sank Richardson felt obliged to prevent a similar happening, and he and Dorothy rowed out from the Isle of Wight in a dinghy, blowing a little whistle and using an umbrella as an amplifier to hear the return signal from the pier. This was to test the value of echo location as a detector of distance and was possibly the first sonar experiment. He filed two patents the same year.

In 1914, during the time he was employed as Superintendent of the Eskdalemuir Observatory of the Met. Office, war broke out.
Like most other people, Richardson’s life was greatly affected by the war. As a Quaker, he declared himself a conscientious objector, and this prevented him from future work in a university post.  Contrary to what might have been expected, Richardson actually became deeply involved at the front, working with The Friend’s Ambulance Unit attached to the French Infantry Division. Taking this important, dangerous but relatively unskilled work was unusual for a scientist, as many were employed by the government during the war, and a large number were called on by the armed forces. While working as an ambulance  driver at the Front, Richardson spent any spare time working on weather prediction, but the main effect of the war was to direct his thoughts towards studying the causes of wars and how they might be prevented.

Richardson’s approach as a pacifist was to collect huge amounts of information on conflicts – he termed them “deadly quarrels” - and they ranged from gang wars in Chicago to the Great War itself. He detailed the number of deaths and developed a mathematical model of war behaviour and the likely outcome of a conflict between well-armed factions. Richardson hated war and, while he did not believe his work would prevent future fighting and loss of life, he treated war as an affliction of the human race. His paper, completed in 1919 was not widely published until 1939.
The other topic which occupied Richardson during the Great War was weather forecasting. At the time it was believed that it was impossible to forecast the weather but Richardson thought that future atmospheric pressure patterns could be calculated if the present state of the atmosphere was accurately known. This involved lengthy calculations and, while serving at the front, he painstakingly worked his way through volumes of weather observations to produce a forecast. He fantasised about a huge building with 64,000 analysts working on reports to produce accurate forecasts, but what he really needed was a computer! At that time, there were problems collecting data on wind, temperature and other factors and mathematicians had greater problems making sense of it all. His first attempts were not convincing, but interest in the subject led to his employment at the Benson Observatory. He experimented on measuring the vertical distribution of temperature and wind, atmospheric turbulence and radiation, devising the “Richardson Number” for determining whether turbulence will increase or decrease. This was summarised in a paper in 1920 and Richardson’s parody of Swift’s doggerel about fleas shows his humour.
“Big whorls have little whorls that feed on their velocity, and little whorls have smaller whorls and so on to viscosity”
In 1920, the Meteorological Office became part of the Air Ministry and Richardson resigned, unable to work for the armed services because of his pacifist beliefs. From then until his retirement, he worked in education. His book on weather prediction was published in 1926 but it was not until the 1950’s and the use of computers that his ideas were taken seriously and his work laid the foundation of present day forecasting.
His many scientific papers and achievements were recognised in 1926 when he was elected to the Royal Society. At the age of 47 he studied at the University of London and added PhD in mathematical psychology to his qualifications. He had decided to apply the strict discipline of mathematics and physics to the study of people. Papers on the quantitive perception of colour, sound and pain followed, but the accepted view then was that such an approach was not valid.  Again he was ahead of his time, and these methods are now widely used.
From 1929 until his retirement in 1940, Richardson was Principal of Paisley College of Technology. In 1943 the Richardsons left Paisley and moved to Hillside House in Kilmun where his scientific life carried on. Puzzled by the notion of sudden thoughts, he wondered if they might be prompted by external radiation, and tested this in the tunnels of the Clyde Underground system. His local reputation as a “mad professor” grew. With a small pension, and despite his great achievements, there was little money for luxuries like household help, so he worked hard in the house and garden himself. His great-nephew Professor Julian Hunt remembered visiting Kilmun, and paints a vivid picture of what Hillside House was like in the 1940s and 50s.
“His life was just one extraordinary experiment or investigation. Just entering the house was extraordinary because he had these pipes and wires with chamber pots hanging in stairways to catch dust. He could apply a scientific way of thinking to everything. If he had tracing paper and put it on a sheet of glass with a light underneath to trace something, he would warn you that the heat from the light would change the dimensions of the drawing paper – so watch out!"
He remembers a family who lived so frugally that visits to them were a seasonal hazard: in the broadbean season, there were broad beans cooked in different ways for breakfast, lunch and tea. But he also remembers his great-uncle casting parsnips on the waters of the loch to watch the way they dispersed (One of Richardson’s papers in the Journal of Meteorology contains the words: …"we have observed the relative motion of two floating pieces of parsnip”…).
Even painting the house became a kind of Professor Branestawm experiment because Richardson would insist on testing the paints before deciding which one to buy. He had his own little chemistry lab and brought the paint back and poured acid and things into it. The house filled with pungent fumes and he would say we are not having that! This seemed to me to be a way of life which was completely different”
Lewis Fry Richardson died in his sleep at Kilmun on 30th September 1953. Until the end his experiments continued, and he continued to write copious papers on computing, the weather and peace. We can only wonder what his reaction to the arrival of the US nuclear submarine base on his doorstep would have been. This Quaker scientist is worthy of more recognition than he ever received outside the scientific world and Kilmun is proud of the connection to a truly remarkable man. 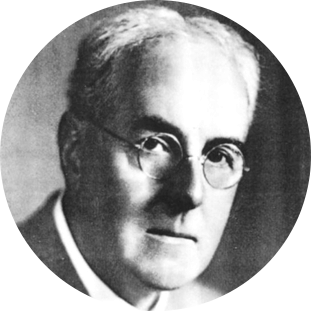