A graveyard is a history of people, a permanent record of the past of our community and a place of peace and sanctuary when the living can feel comforted  and remember and feel close to the families no longer with them.

Graveyards exist because past life is worth remembering, - families can make lasting tributes to people who were cared for; communities can mark the lives of respected members. Tributes are made for the life, not the death of an individual and it is an opportunity to publically record information for the future which may otherwise be lost. Carvings and epitaphs leave stories of their own, and are a treasure trove of beautiful artwork Gravestone symbolism is a hidden language that, when decoded, can tell volumes about the deceased, their life, and their death. These places are not about a morbid fascination with death.

Each burial ground provides rich material for the study of the community. At Kilmun we have photographed and recorded the inscriptions on each grave marker, but this is only the beginning.  As well as recording the history of family groups, there are a number of areas we will focus upon.

Details from the inscriptions will provide a source of information for community study, showing occupations, status, places people lived and came from, ages at death & life expectancy, comparisons between females and males, child mortality, periods of high and low mortality, wealth of families able to provide fine markers, size of families, the effects of war on the community ….and more.

Artistic opportunities exist for people of all ages – taking rubbings, photographs, painting and drawing, and the study of various fashions at different periods.

There are also practical things to consider which will help preserve what we have, and which will prevent further decay, making the graveyard an appealing, peaceful and interesting place for the community to spend time. While the stones belong to someone – the floral tributes show that families still visit and care for some of the graves – many are neglected. For safety reasons the council have placed some stones on the ground. There is a need for appropriate attention to be given to preserve what we can. This will require advice from the experts at Historic Scotland and the formation of a dedicated team of practical people to safeguard Kilmun graveyard.

The stones in Kilmun graveyard display a great variety of symbols and while the meaning of some of these carvings is obvious, like a broken tree or flower representing death, some are much less clear. Even professional scholars disagree about the meaning of some designs and it is easy to jump to the wrong conclusion about a particular image. Some symbols are very common, some have more than one interpretation, and some interpretation must be seen as a possibility rather than a certainty.

The shapes of the grave markers differ too, from plain slabs to ornate granite, obelisks and crosses. The earliest shape at Kilmun is the hogs-back stone which has been re-used in another grave. This is a type used in Viking times. There are table-stones, tablets and of course crosses. Until the 19th century the cross was rarely used as it was seen to be a Papist symbol, but it became popular in the 19th century and there are many examples of plain and Celtic crosses in the graveyard. The obelisk, an Egyptian form, was considered to be tasteful and uplifting, and Kilmun has iron markers which are quite rare. Later Victorian stones can be massive granite afairs, but after the Great War headstones tended to be smaller and more uniform.

The carvings on stones became more elaborate as the 17th century drew to a close, and as prosperity increased for people like farmers and skilled craftsmen, they were able to afford individually designed memorials produced by the best stonemasons. As well as carvings of religious significance, these stones often displayed depictions of the tools of the person’s profession or trade. These are still recognisable as blacksmith’s, gardener’s, miller’s baker’s, tailor’s, and other craft tools. Masons, as members of the Freemasons Craft have their own distinctive emblems and several examples are found at Kilmun.

Studying the epitaphs and writing on the stones is rewarding, not only for the dates, but for the details of a person’s life, what it was considered important to include about an individual, the type of prose, the style of lettering, and spotting the mistakes. Some examples include the name of the person erecting the stone and reflect the status a fine stone might give to a family…or merely a chance for someone to show off! It is unusual to see the cause of death inscribed, unless accidental and several stones mention drowning, which is not unusual in coastal areas.

A list of interpretations follows, but is by no means definitive! 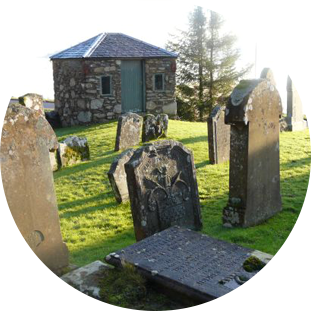