Before the telephone and emails became part of our lives, the telegram was the most popular way to send a written message faster than the postal service. Experimental telegraphs using wires to pass electrical signals were developed in the early 1800s, though it was the inventors Cooke and Wheatstone during the late 1830s who enabled their first use. This was initially on the railways, where, in warning of urgent problems, this form of sending messages had the obvious advantage of travelling much faster than the train. In the United States, Morse developed a system of using a series of short and long pulses of electric current, by turning the current on and off, to represent letters of the alphabet (Morse code). This system dominated telegraph communication for the next 100 years. From the 1850s, telegraph networks spread throughout the world with extraordinary speed.
The business potential was obvious, and private firms were set up to extend the system all over the country. This important system was, however, nationalised and became part of British Post Office operations following the Telegraph Act of 1868. By that time, the enterprising Victorians had seen the even greater potential of linking islands and continents using the system, and the first successful Atlantic Cables were laid in 1865 and 1866.  This was the time that the smallest of all independent submarine cable companies was born.
The West Highland Telegraph company had a system linking Glasgow with many small towns and villages in the west of Scotland which had difficult access and took time to reach. Lines, constructed by Reid Brothers, ran from Glasgow along the north bank of the Clyde, to Helensburgh.  The local submarine cable ran under Loch Long from Cove to Blairmore, where Mr McLeish the grocer became the Agent. From there, it ran across the hill, the poles visible clearly as the hillside was not then forested. A branch ran from near the Cot House to link with Dunoon and the Agent, Mr MacLeod, who was the Parochial Poor Inspector. Other lines went as far as Campbeltown, and there were proposals to lay a link to Ireland and the Atlantic.
The service was expected to be at its busiest in the summer months, and was certainly a rural and largely self-help operation, with access and the work of agents often voluntary, their homes or shops used without charge. Children or friends were often the people delivering messages, and the takings were sent weekly to the Head Office in Glasgow. Telegraph Stamps could be bought for 6d or 1/-, and the charges were 1/- for a 20 word message, and 6p for each following 10 words or less.
The Glasgow Herald of Monday, February 25, 1867 reported a local problem concerning the cable at Blairmore, which was attacked by vandals (see below). Map provided courtesy of Iain McKenzie. 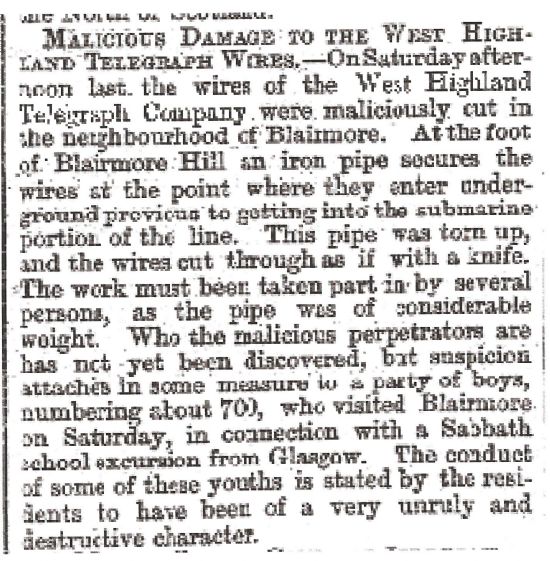 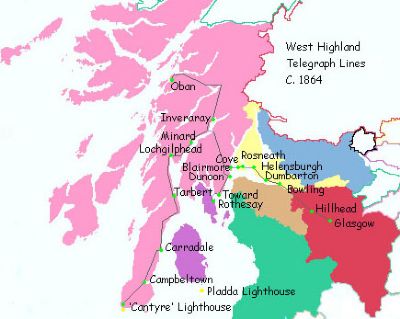 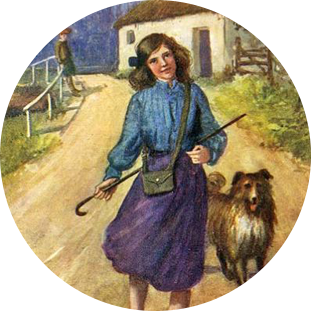 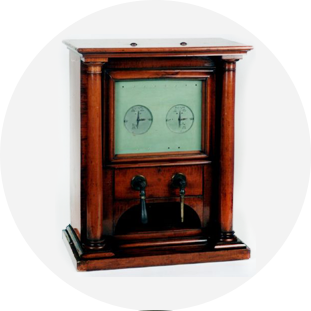