Archibald Campbell, second son of the 1st Duke, was born in Surrey in 1682. Part of his childhood was spent at Ham House and the remainder at Duddingstone House near Edinburgh. Educated at Eton and Glasgow University, Archibald continued to Utrecht where he studied Civil Law, but his legal studies were abandoned when he followed his elder brother John into the army. It was considered unseemly for the son of a Duke to be a lawyer, and as money was restricted and an income was needed, the army was seen as an acceptable profession. An even better prospect was politics.

John (the heir) was first to venture into the political world and soon became High Commissioner (effectively Queen Anne’s representative in Scotland). Archibald’s progress was equally rapid, although retaining his rank as Colonel brought him a welcome income, and, at the age of only 23, he was appointed Lord Treasurer of Scotland. Archibald helped found the Royal Bank of Scotland and his portrait has appeared on the front of their banknotes since 1987. The brothers negotiated the Treaty of Union. Archibald was nominated one of the Scottish Commissioners and, in return, was rewarded for his work by the Queen. He became Earl of Ilay, Lord Oransay, Dunoon and Arros.

Still an army officer, Ilay acquitted himself well at the Battle of Sheriffmuir in 1715, where he was wounded. His political contacts and legal education led to an appointment as Lord Justice General and the chance to make money – he soon became very wealthy indeed. The fortune was used to cultivate his scientific and other interests. He established an enviable library and collection of valuable scientific instruments and unusual new equipment. Archibald was a true academic who shared his collections with like minded people and established University Chairs. He devised various improvement schemes on his estates and laid out splendid gardens there.

While his business life was a great success, Archibald’s married life was disastrous. He separated from Mary Whitfield soon after the wedding and she died in 1723. He was to find happiness with Anne Williams or Shireburn, who was his partner until he died, and she gave him an illegitimate son, William, who took the Campbell name.

As second son Archibald had no expectations but he became Duke when his elder brother John died in 1743. Shortly afterwards Archibald decided to replace the fortress at Inveraray with a magnificent new castle, built for comfort and beauty rather than defence. Ironically work was begun the year before the Highlands were disrupted by the arrival of the Young Pretender. The castle and new town at Inveraray took a further 40 years to complete.

While at dinner at his London home, Archibald collapsed and died on 15th April 1761. The Argyll Estate and Scottish property went to his successor John, but all his English properties were left to Anne and his son William. Archibald also left a year’s wages to his servants – apart from his cook, who he believed was overpaid. The title of Ilay died with him. His body was transported by sea to Edinburgh and across country for burial at Kilmun. 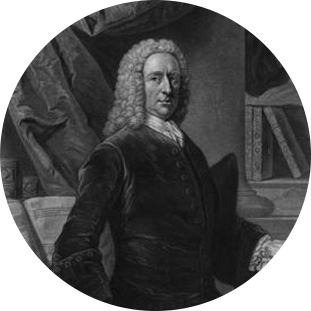